Welcome!!! Here I put biology facts about a particular animal I find, and I try to find lots of different ones! Enjoy!

Fire gobys are dartfish native to the Indian and Pacific Ocean. They live in coral reefs, but are sometimes kept in saltwater tanks! It's known well by fishkeepers for its pretty colors, but it isn't all for show - it uses its bright dorsal fin to alert other fish to predators incoming! Despite its name, it's nowhere near as aggressive as a fire! It's a very passive fish, living primarily in sand burrows and not even hunting its food, instead waiting for it to float into its mouth through ocean currents, eating things such as worms and shrimp.
And that's the Fire Goby! Have you ever seen one in a tank?

Red Warblers are passerine (order of birds that makes up more than half of all birds!) birds. They're so tiny - about 5 inches (13 cm) in length! They live in specific areas throughout Mexico, which have 3 subspecies, each different in ear patch and body feather color. Pictured here is an adult Red Warbler, but the younger birds are pink and brown. When they're born, both parents take care of the bird for about 10 days, then they're already up and flying out of their nest! They eat insects and mostly gun for the ones right above the forest floor! Most birds in the area sing during all sorts of weather, but not the Red Warbler - it prefers to wait for bright and sunny mornings! Sometimes, you can find them in flocks with different species of birds. To defend itself from predators, its feathers have nitrogen compounds in them - which make them either gross tasting or inedible entirely to possible predators!
And that's the Red Warbler! Have you ever seen one before? 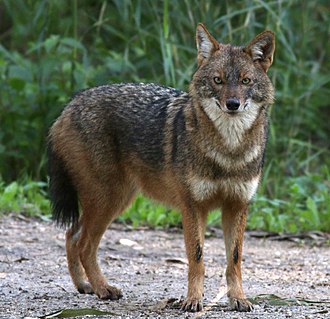 Golden Jackals are wolf-like canids (family) that live in valleys near water in Asia and Europe. They are characterized by their coat changing throughout the seasons, from a cream yellow in summer to a dark beige in winter. They can live in many different habitats, and can move long distances with their long legs and smaller body! It mostly eats meat, specifically rodents and birds, and fruits. They form families for life and sometimes live with their litter as well, and also form packs with social behaviors such as communication and group howling and grooming! However, these canids still hunt alone, sometimes in pairs. They appear in Indian Folklore as intellegent creatures, and in Hinduism as a familiar of Chamunda, the god of cremation!
And that's the Golden Jackal! Isn't their fur pretty?